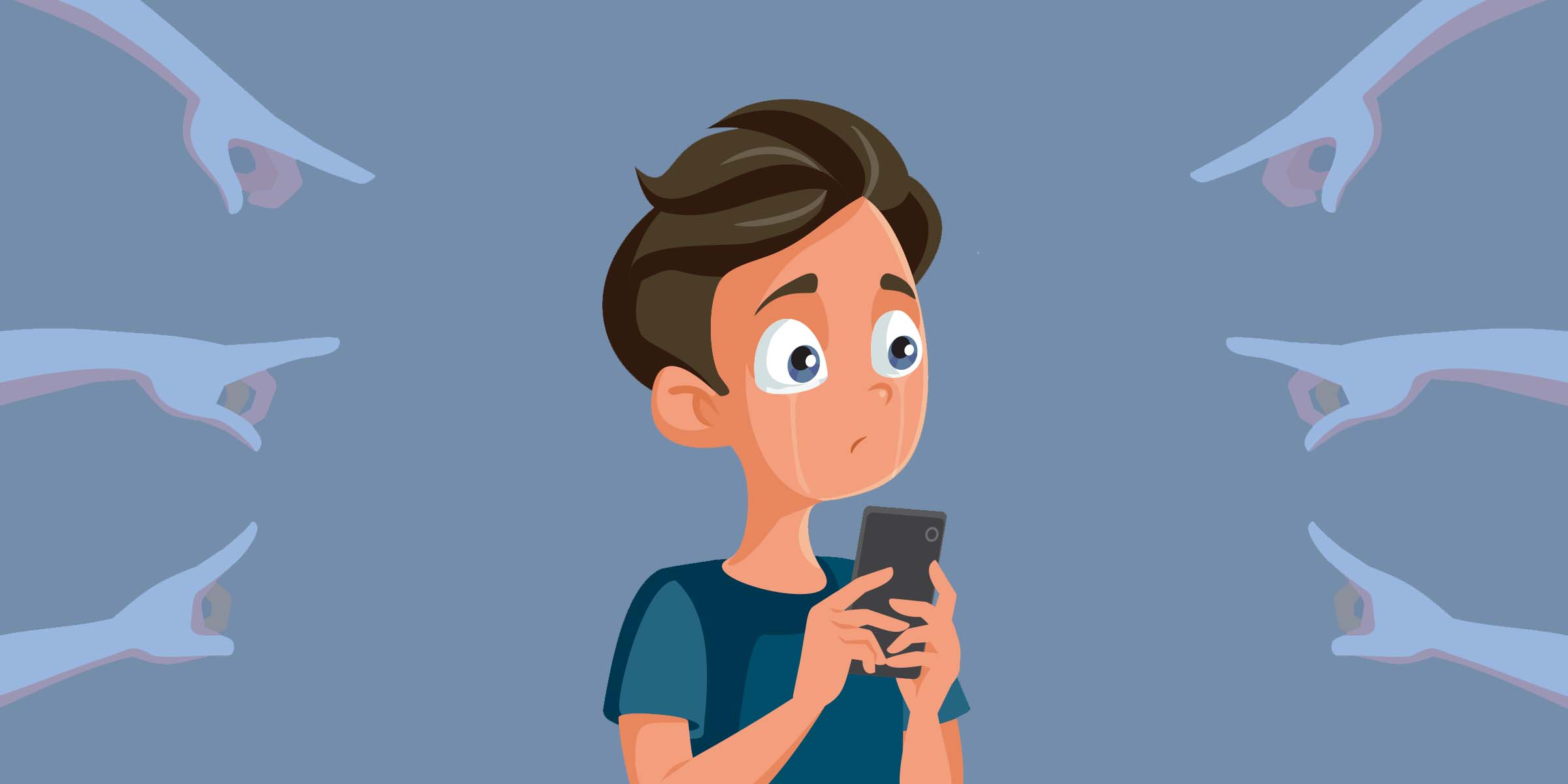 Bullying has always been a problem for society and has evolved into a more brutal and ugly form over the last decade. Many people that experienced bullying in the past did so physically and were able to get away from the perpetrators who would torment them at physical places such as schools. With advancements in communication technology such as smart devices and the Internet, cyberbullying has become rampant and threatens the livelihood of our children’s health and well-being.

Sam Laird published the infographic ‘Cyberbullying: Scourge of the Internet’ on Mashable citing how prevalent bullying has become through the rise of social media and the ability to remain hidden by anonymity. Unlike physical bullying, cyberbullying is difficult to get away from. Social media has made it easier for people fall victim to public ridicule and shaming with little to no risk of the bullies getting caught or punished for their actions. In fact, 81% of children say that it is easier to get away with bullying online than it is in person.

Online harassment often crosses over into real world harassment and a form of violence that leads to both emotional and physical trauma. Former model and business entrepreneur Katie Price recently raised awareness of her son Harvey Price falling victim to cyberbullying on ITV’s show Loose Women. She cited that 81% of 13-18 year olds have also been exposed to online hate.

Results from a survey of 10,000 people shared on the ‘No Bullying Website’ showed that:

The problem has become so bad that young people are starting to accept cyberbullying as a part of everyday life. The graph in the link below shows the results of 457 students who participated in a survey about cyberbullying.

The following graph in the link below shows the data split by gender.

Types of abuse most people face when being bullied online:

Harassment is the act of sending rude, offensive and insulting messages that are abusive, humiliating, explicit and offensive. It may involve communicating true or false allegations to defame, slander or threaten people.

Cyberstalking is an easy way to abuse people with the anonymity of the internet providing perpetrators protection from authorities. These people often harass their victims with threats, or fear. Perpetrators use social media platforms like Facebook to stalk their targets, often leaving their victims vulnerable and exposed. Cyberstalkers are also known to hurt their victims financially and can also go after their victim’s friends and work colleagues.

These people can be dangerous and threats from these individuals must be taken seriously, as they can turn out to be child molesters, serial killers or psychotic individuals.

Also known as flaming, where fights and conflicts often occur through emails, instant messaging or chat rooms where hostile, angry and rude messages are exchanged.

This refers to deliberately upsetting, shocking or antagonising individuals or specific groups of people by communicating extreme views that are offensive. Their objective is to be disrespectful and to upset people from a position where they are unable to defend themselves or to receive repercussions for their actions.

Deliberately excluding someone from an online group such as group messages, chats, online apps and gaming sites. It is a common form of social bullying.

Where people send mean or hostile messages to make fun of someone. This might include setting up web pages or sending messages through email, instant messaging or chat rooms.

Where people trick others into revealing personal information about themselves only to have it exposed online by others.

Where people share personal information or secrets about others online. This might occur in the form of pictures, videos or messages.

Impersonations online is a growing problem because people can engage in sinister acts behind anonymous or other people’s identities. In most cases, impersonations are used to send malicious messages to defame or inflict damage on the victim’s character by misusing their private information. Although most social media platforms have anti-impersonation policies where those pages or profiles can be removed, impersonating people isn’t strictly illegal and provides a loophole that can be exploited by cyberbullies.

In extreme scenarios, impersonation can be accompanied by fraud with a clear intent to make a gain or a loss, whether it relates to money, property or representation.

Lookout for the following signs to see if your child is a victim of cyberbullying:

Some behavioral signs to look out for include:

Cyberbullying has negative effects on victims by increasing depression, loneliness, the lowering self-esteem and producing feelings of powerlessness; all of which are precursors to suicidal thoughts and behaviors. More youth suicides are occurring because of harassment and mistreatment over the Internet and through digital communication devices. There is a deadly power in mean words, which can drive people to commit suicide. Tragic stories like 13-year-old Megan Meier’s suicide as a result of cyberbullying through social network MySpace in 2006 serves as a constant reminder of the disastrous outcomes that can occur. For the perpetrators, it may seem like harmless fun. However, the victims are often emotionally scarred to consider or commit suicide as a result of having their self-confidence reduced one piece at a time by their tormentors.

What Are Some Of The Popular Social Media Platforms Parents Should Be Aware Of?

What are some actions that can be taken against Cyberbullying?

If your child is or has suffered from online bullying, you can advise your children to take the following actions.

People don’t have to suffer in silence. There are support groups that can also help people who are victims of cyberbullying. If you or anyone that you know experiences cyber bullying, you can seek help from the following organisations.

If you are being harassed online in Australia, you can contact ACORN (Australian Cybercrime Online Reporting Network) to report any malicious cyber activity. Australian citizens and its residents are protected by Australian law and perpetrators can receive up to 3 years imprisonment or fines or more than $30,000. You can contact a local police department or phone 131 444.

Children that need support should speak with a parent or teacher to speak about any incidents that they may be facing. They can also receive support from Kids Helpline on 1800 55 1800.

Depending on the level of threat towards the victim, there are different ways to seek help. For cyberbullying issues within the school, students are encouraged to escalate their issues with their teachers; however if it needs to be escalated to law enforcement, you will need to consult with the relevant authorities in your state. You can review the policies and laws via the Stopbullying.gov. If a person is in any immediate danger, they should contact 911. If the person appears to be feeling helpless and is considering suicide, they should contact the following numbers.

Canadian citizens and residents can report cyberharassment to the Royal Canadian Mounted Police. Your local police department can decide whether an investigation is warranted or if charges should be laid. Alternatively, you can report issues to Cybertip.ca. Children and young people can also seek support by contacting Kids Help Phone on 1-800-668-6868.

The United Kingdom has several support groups who can help victims of cyberbullying. These include:

New Zealand citizens and residents can report incidents with Netsafe. Local police can also be contacted the following ways.

Singaporean citizens and residents can lodge cyberbullying incidents with their Neighbourhood Police Centre (NPC) or via the Electronic Police Centre so that a case can be raised. Perpetrators can be charged under Singapore’s anti-social actssuch as cyber harassment and bullying. These carry fines of up to $10,000 and 24 months jail time.

South African citizens and residents can report cyberbullying to SAPS by calling 0860010111. Additionally, they can use the Cybercrime contact form.

Irish citizens and residents can register for a confidential chat on the Childline website, text the word ‘talk’ to Teentext on 50101 or call for free on 1800 666 666.

Another great resource for Cyber Bullying information can be found here:

Guide to Cyberbullying: Awareness and Prevention